The 51-year-old banker wants to focus on Qind, his San Francisco startup that organizes home parties to sell cannabis products, to get a piece of what he says could sprout into a $100 billion annual business in the U.S.

“It’s like the internet in 1997 or 1998,” said Mr. Soqui. “Investment opportunities to create new businesses have never been more compelling.”

Entrepreneurs and investors are rushing headlong into the nascent legal marijuana industry, fueling a stock craze reminiscent of the late 1990s dot-com bubble and the recent bitcoin mania. Big companies, wealthy families and amateurs alike are taking stakes in speculative companies, many of which have scant revenue or history.

Tilray Inc., TLRY -30.25% which grows marijuana in Canada and is one of just a few pot companies listed in the U.S., had its stock halted multiple times on Wednesday, after announcing it had received permission to export a small amount of cannabis to California for a medical study. Because it is difficult to gain approval to bring cannabis from abroad into the U.S., where it hasn’t been legalized under federal law, Tilray’s announcement suggested it had gained an advantage over other suppliers. 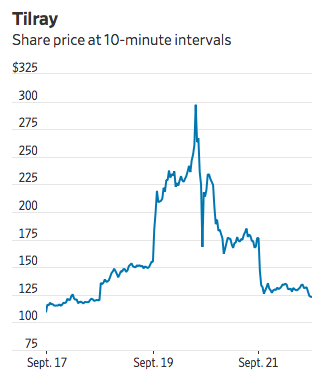 The company’s share price more than doubled between Monday and Wednesday, nearing $300 before plunging Friday to end the week at $123, after a lawmaker questioned the decision to allow a Canadian company to supply marijuana for the study. Rep. Matt Gaetz (R., Fla.) said the federal government should give the license to an American company instead. A Tilray spokeswoman declined to comment.

Canada has become a hotbed for the cannabis industry because it is one of only two countries, along with Uruguay, that has legalized recreational marijuana use. Starting Oct. 17, Canadians will be able to buy pot from licensed vendors across the country. In the U.S., the use, sale or possession of marijuana is illegal under federal law, though 30 states permit medical use and nine states allow recreational use.

Federal restrictions make it more difficult for U.S. cannabis companies to make financial transactions, and markets such as the Nasdaq and Toronto Stock Exchange refuse to list companies that have any federally unsanctioned U.S. business, leading many to list on other lightly regulated Canadian markets. 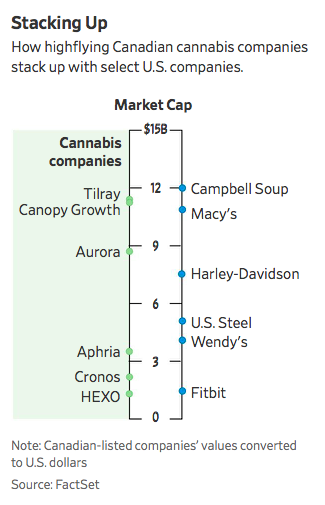 There are more than 120 marijuana companies listed on Canadian stock exchanges, but the sector is dominated by five companies, whose total market value has catapulted from less than $4 billion to nearly $40 billion in the past year.

About 100 of the stocks are listed on the Canadian Securities Exchange, a small loosely regulated Toronto exchange designed for startups and dubbed by one banker as “the cannabis stock exchange.” Many of these companies are so new they are still developing business plans.

Investors took notice last year when Constellation Brands Inc., whose stable of products includes Corona and Modelo beer, sank nearly $200 million into Canopy Growth Corp. CGC -5.00% , one of Canada’s biggest marijuana growers. In August, the beverage group raised its bet on Canopy, investing an additional $4 billion. Constellation’s president, Bill Newlands, told investors recently that the company is expanding into cannabis products through Canopy because it believes more countries will open their doors to medicinal or recreational sales, and the global market “could be a $200 billion business in very short order.” 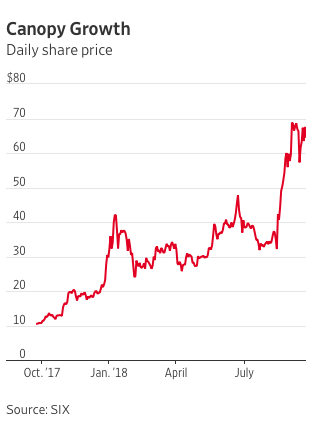 The optimism has grown beyond any reasonable fundamentals, some investors say. Tilray, for example, posted less than $20 million in revenue for the first half of the year. It ended its volatile week with a market value of $11 billion, about the same as Macy’s Inc., which has almost $25 billion in annual revenue.

“This will be a global industry, and it will rival alcohol or beverage in the size and scope,” Tilray Chief Executive Brendan Kennedy said in an interview. The company expects a new facility in Portugal to begin operating next year. “The challenge for us is moving fast enough,” Mr. Kennedy said. “The pace is faster than even I expected.”

“This is like a gold rush,” former Mexican President Vicente Fox said during a recent visit to Toronto to promote Khiron Life Sciences Corp. KHRN 11.92% , a Canadian medical-marijuana company where he serves as a director. Khiron, which reported a net loss of 6.7 million Canadian dollars (US$5.2 million) and no sales for its second quarter, raised C$13 million through a stock sale earlier this month.

Jesse Pytlak, a Toronto analyst with Cormark Securities, estimates cannabis stocks are currently valued at more than 10 times the C$5 billion to C$9 billion market expected to emerge in Canada by consulting firm Deloitte after legal recreational sales begin. He warned investors are prematurely deciding which companies will dominate a new market before a single ounce of recreational pot is legally sold in Canada.

One lawyer who has advised banks and marijuana companies in recent deals said a shakeout is inevitable. “I believe there’s a great opportunity for our insolvency lawyers in this industry,” said Patricia Olasker, a partner at Toronto-based Davies Ward Phillips & Vineberg LLP. “There are going to be lots and lots of failures.”

As the fervor intensifies, investors have grown indifferent to skimpy records for sales that would normally be viewed as red flags.

Shortly after startup Green Organic Dutchman Holdings Ltd.TGOD -6.04% listed on the Toronto Stock Exchange in May, the company carried a market value of C$2.1 billion. A spokesman for the Ontario company said it hasn’t yet signed agreements to supply its marijuana in Canada and currently only grows at a small 7,000-square-foot research facility.

“Our team is confident that there will be shelf space for our organic product,” the spokesman said. It hopes to build one million square feet of cultivation space by next year, he said.

Some players in Canada’s mining and oil-and-gas sectors have reinvented themselves to tap eager cannabis capital. “Money has dried up for new oil-and-gas ventures. I had to look at something else,” said Craig Kolochuk, a 20-year-veteran of Alberta’s energy sector.

Earlier this year, he helped restructure Relentless Resources Ltd. into a hybrid cannabis and oil-and-gas producer called SugarBud Craft Growers Corp., where he is now CEO. The company has raised about $15 million in stock and rights offerings, and $17 million in debt. “Instead of analyzing barrels, we’re analyzing ounces,” he said.

Even some of the sector’s boosters say the craze is getting ahead of itself. Mr. Soqui, the former Wall Street banker, said some of the companies that have gone public suffer from “very weak” management, and investors need to be ready for a fall in marijuana prices because too many suppliers have entered the market.

“It’s way oversupplied. You have high valuations that are irrational,” he said.